HNF Series Mains Filter manufactured by Indramat, Bosch, Rexroth. This Mains Filter has a Nominal Current of 94 A along with a Mains Connecting Voltage of 480 V.
Request a Quote Request Repair 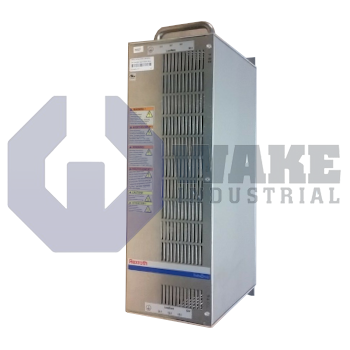 HNF Series Mains Filter manufactured by Indramat, Bosch, Rexroth. This Mains Filter has a Nominal Current of 94 A along with a Mains Connecting Voltage of 480 V.
Request a Quote Request Repair

Warranty
1 Year Wake Industrial Warranty Included
Shipping
Worldwide shipping via DHL, UPS, and Fedex
Exchange
Call to find out about our exchange credit for your defective unit.
Sell Us Your Surplus
Have a HNF01.1A-F240-R0094-A-480-NNNN to sell?
Click Here

HNF01.1A-F240-R0094-A-480-NNNN mains filter units from Bosch Rexroth Indramat are a necessary part of a fully functional automation solution. The HNF01.1A-F240-R0094-A-480-NNNN operates by consuming direct mains electricity of up to 480 volts three-phase AC and converting it into a stabilized, more perfectly rendered waveform. When the newly reformed waves are passed through up to 75 consecutive feet of cable, they maintain the capability to provide the steady flow required by sensitive electronic components of the type used in Bosch Rexroth Indramat control equipment. HNF01.1A-F240-R0094-A-480-NNNN units, much like many other pieces of Indramat machinery, can perform as per rated specifications in ambient conditions of anything below 45 degrees Celsius and above 0 degrees Celsius. Derating, but continued performance, is guaranteed up to 55 degrees Celsius and 4000 meters of elevation.

In order to achieve the best possible results, using one or multiple HNF01.1A-F240-R0094-A-480-NNNN units may be necessary to cover an entire automatic grid’s worth of power--fortunately, scalable design makes that a simple matter. Each unit can modulate up to 94 amps of continuous current, ample supply for several Bosch Rexroth Indramat components. Despite its considerable capacity for scrubbing interference from large amounts of power, the HNF01.1A-F240-R0094-A-480-NNNN weighs only 28 kilograms.

Moreover, it measures only 150 millimeters in width, 440 millimeters in height, and 252 millimeters in depth. Its relatively compact size allows the HNF01.1A-F240-R0094-A-480-NNNN to be used en masse to accomplish anything from the smallest to the largest of automation projects with a cost-efficient footprint, guaranteeing no matter what the task that all of your Bosch Rexroth Indramat machinery functions exactly as your compatible motion control programs have been designed to ensure that they do.