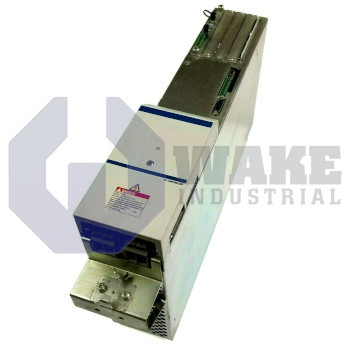 Warranty
1 Year Wake Industrial Warranty Included
Shipping
Worldwide shipping via DHL, UPS, and Fedex
Exchange
Call to find out about our exchange credit for your defective unit.
Sell Us Your Surplus
Have a HDS03.2-W075N-HS74-02-FW to sell?
Click Here

HDS-series drive controllers are well-known for their modular design practices, making them suitable for use in combination with many Bosch Rexroth Indramat electronic components. Both other drive controllers of the DIAX04 family and the MKD, 2AD, 1MB, and MHD motors with which those drive controllers are compatible can be combined on one power control unit to accomplish exactly the task at hand with exactly the right properties for each job involved in doing so, thus improving cost efficiency over other implementations.

The HDS03.2-W075N-HS74-02-FW is an instance of this family of drive controller that is rated to 75 amps of current at the voltages provided by compatible HVR and HVE power units. Each HDS03.2-W075N-HS74-02-FW device has a built-in cooling system, allowing it to tolerate surrounding temperatures of as little as 5 degrees and as many as 45 degrees Celsius with no impact on performance.

HDS03.2-W075N-HS74-02-FW motor control devices weigh in at 11 kilograms and bear the patented Bosch Rexroth Indramat SERCOS optical connection daisy chain interface. Having a SERCOS interface makes interconnecting an array of DIAX04-family drive controllers both simple and extremely reliable due to the fiber optic connection employed. With an IP rating of 10, some caution must be employed in the handling of HDS03.2-W075N-HS74-02-FW controllers: they can resist contact by large objects, but are vulnerable to infiltration by water. When properly installed by following extensive manufacturer guidelines, however, the HDS03.2-W075N-HS74-02-FW proves itself a highly cost-effective and easily scalable modular drive controller. The perfect combination of HDS03.2-W075N-HS74-02-FW motor drivers, motors, and other Bosch Rexroth Indramat hardware has the potential to be the optimal solution to your industrial robotics and automation ventures.