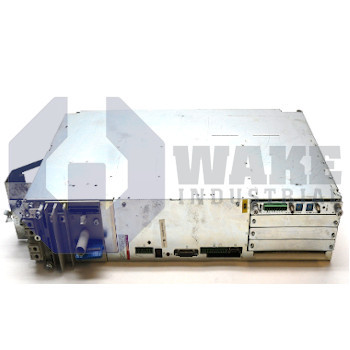 Warranty
1 Year Wake Industrial Warranty Included
Shipping
Worldwide shipping via DHL, UPS, and Fedex
Exchange
Call to find out about our exchange credit for your defective unit.
Sell Us Your Surplus
Have a HDS03.2-W075N-HS12-01-FW to sell?
Click Here

Bosch Rexroth did not just stop at building their drive controllers, they created configuration manuals and function manuals so that they can be fully utilized and understood by their customers.

It is because of their efforts into letting people understand their drive controllers which makes the HDS03.2-W075N-HS12-01-FW drive controller an excellent product choice for your automation system. This particular model has everything in common with the HDS03.2-W075N-HS11-01-FW except for a few differences in their configuration number. The HDS03.2-W075N-HS12-01-FW accesses its command communication with the use of the SERCOS interface with a 75 A rated current. It also makes use of a firmware which is usually ordered as a separate entity from the drive controller itself. Furthermore, the HDS03.2-W075N-HS12-01-FW makes use of the X3 and X6 Connector with no mounting plate or shield connection cable along with both a small hose clamp and also a big hose clamp. This drive generates warnings that can be separated into two classes on the basis of whether the drive executes an automatic reaction when the warning appears or not. Also, an error message can be generated in a situation where a condition is encountered which no longer allows for proper operation and in this case, the drive will switch itself off until the error message is cleared or a 0-1 edge bit is entered into the controller enable.

The HDS03.2-W075N-HS12-01-FW also makes use of an analog interface which allows it to switch automatically into operation mode the moment the control voltage is switched on. Furthermore, in order to configure the motor for this drive, the parameters for motor features which includes peak current, maximum velocity, etc. has to be entered with DRIVE TOP software using data from the motor data bank.