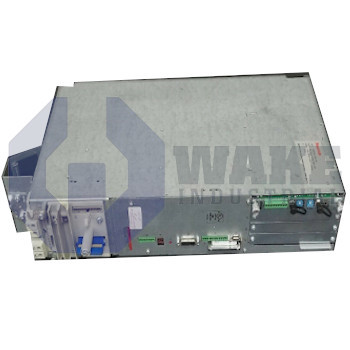 Warranty
1 Year Wake Industrial Warranty Included
Shipping
Worldwide shipping via DHL, UPS, and Fedex
Exchange
Call to find out about our exchange credit for your defective unit.
Sell Us Your Surplus
Have a HDS03.2-W075N-HS11-01-FW to sell?
Click Here

As a company, one of the things Bosch Rexroth is interested in most is automation technology. This is why they build gears and controllers for both individual and industrial use.

The HDS03.2-W075N-HS11-01-FW has a maximum ambient temperature with nominal data of 45â—¦C, the maximum ambient temperature with reduced nominal data of 55â—¦C, a device weight of 11kg and a device width of 100mm. The rated power consumption, control voltage input without holding brake, without control section at UN3 = DC 24 V (UL) is 25W with the maximum input current being 37 A and the maximum output current at 40 A.  Furthermore, the power dissipation at continuous current and continuous DC bus power respectively plus the dissipation of braking resistor is 220 W while for the field wiring material, only a class 1 wire or its equivalent can be used.

The HDS03.2-W075N-HS11-01-FW drive controller is also equipped with two ground connections to the supply module at the back wall of the unit and the mounting rails as well as, in front of the unit where the grounding bracket is and when the drive motor is connected, the connections TM+ and TM- that are very much equipped with dependent resistors are usually used to evaluate its temperature.