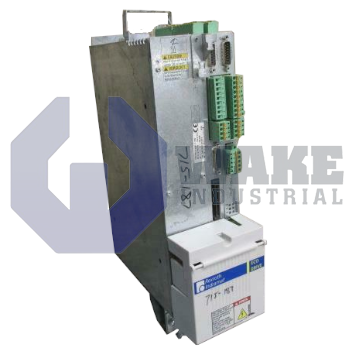 Warranty
1 Year Wake Industrial Warranty Included
Shipping
Worldwide shipping via DHL, UPS, and Fedex
Exchange
Call to find out about our exchange credit for your defective unit.
Sell Us Your Surplus
Have a DKC21.3-100-7-FW to sell?
Click Here

Rexroth Indramat’s DKCxx.3 drive controllers are a series of high-performance servo-drives. They are integrated into the ECODRIVE03 system as a cost-effective way of providing versatility in servo-motor automation, as well as, improvements over the predecessor ECODRIVE systems. The DKC21.3-100-7-FW is a custom type of the DKCxx.3 with 3 communication interfaces: an analog interface, a parallel interface II, and RS232 / RS485* for networking with a PC.

The DKC21.3-100-7-FW comes in the typical rectangular DKC drive design, with a compactness in the arrangement of electrical connection ports. Featuring two options for encoder connection, this servo-drive is operable for high precision automation. Also, to improve its overall reliability for automation, this drive features protective conductors for motor and mains connection. It also features an IP20 protection, and a motor temperature monitoring policy. According to its type code, the maximum current output for this drive is 100A.

Depending on the connected motor, the maximum permissible current can also be adjusted by switching its frequency between either 4kHz or 8kHz; this results in output currents of 40A and 32A respectively. This servo-drive requires a separately considered firmware module, and this maps the input-output characteristics of the drive. In general, most DKC drives have similar firmware options to allow for forward and backward compatibility. To operate this servo-drive, the mains electrical connection is meant to be in either a single or three phase setting. Based on the 100A maximum current rating of this drive, it supports single source, central and group mains supplies; however, the choice of supply option is dependent on the number of DKC drives co-integrated alongside the DKC21.3-100-7-FW into the larger ECODRIVE03 system. The input voltage requirements for this drive is from 200V to 480V AC, for which it can deliver a nominal charging current between 12A and 28A.