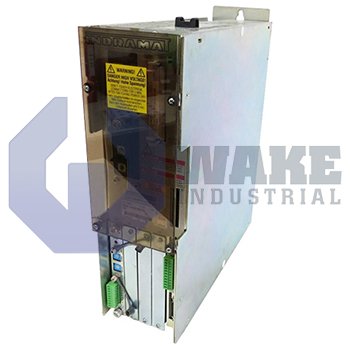 Warranty
1 Year Wake Industrial Warranty Included
Shipping
Worldwide shipping via DHL, UPS, and Fedex
Exchange
Call to find out about our exchange credit for your defective unit.
Sell Us Your Surplus
Have a DDS02.2-A200-BE12-01-FW to sell?
Click Here

Bosch Rexroth is a German Engineering firm which excels in providing solutions for machinery applications, factory automation, mobile applications and factory automation. It acquired Indramat, which is also a German firm making drives, controls, and servomotors, which is extensively used in heavy machinery. Indramat products are still available with the name and other series are sold under names Indradyne, Indradrive, and IndraControl. Besides manufacturing these devices, Indramat also provides consultancy to the factories and other heavy machinery using organizations about how and when should they replace the parts, machines and also service Indradyne equipment on the field.

The DDS02.2-A200-BE12-01-FW drive controller model is a digital, modular DDS drive of version 2. This version has Diax02 type of firmware that is however identical to its predecessor i.e. the DDS02.1 series of drive controllers. The rate control system of the DDS02.2-A200-BE12-01-FW series is 200A and is operated through analog input or fiber optic cable deploying Sercos technology which improves the communication between the control and the drive. Devices having FW versions need service cable of IKS0391 to start the driver controls with analog interface. Each unit has a connector kit named ‘S’ attached in every unit for configuration along with the motor feedback connection X4.

The DDS02.2-A200-BE12-01-FW is a series 2; version 3 DDS drive controller which is manufactured by Indramat and that provides around 75 meters of feedback cables for enhanced communication and bind the drive controller and servo motors.

In cases when motor holding brakes, an external 24V voltage connector is used. The motor power control in the series DDS02.2-A200-BE12-01-FW has three lines for motor power connections, separate cables for the motor brake along with one line of the productive conductor connection.