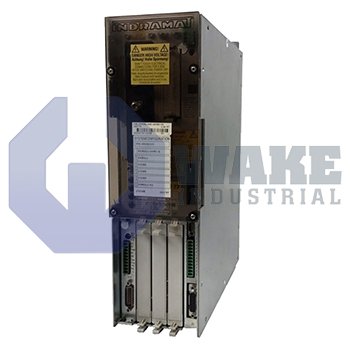 Warranty
1 Year Wake Industrial Warranty Included
Shipping
Worldwide shipping via DHL, UPS, and Fedex
Exchange
Call to find out about our exchange credit for your defective unit.
Sell Us Your Surplus
Have a DDS02.1-W025-DS01-02-FW to sell?
Click Here

In the past, Servo Drives were meant to serve as individual components that were separate from the motor and controller. However, latest technologies have enabled motor manufacturers like Bosch Rexroth to develop the new, integrated motor-drive systems that provide a wide range of benefits. In these integrated designs, the motor is effectively combined with other essential components to complete an entire motion control system with a feedback device (encoder), amplifier, and the drive controller. The integrated motor-drive system offers high levels of convenience as there are less components to connect together. Additionally, this also means less cables and wiring which leads to lower costs for the owners. The greatest advantage of such integrated servomotors is that they are programmed to serve quickly and easily, which reduces development times and increases the overall productivity of a factory.