The CMP70.1-SP-505-FN-NNNN-NW control unit from Bosch Rexroth is a functional unit of the Indramotion MTX control unit. The CMP series offers both CNC and PLC functionalities, making it a very versatile unit. 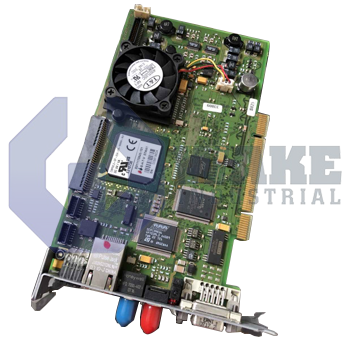 The CMP70.1-SP-505-FN-NNNN-NW control unit from Bosch Rexroth is a functional unit of the Indramotion MTX control unit. The CMP series offers both CNC and PLC functionalities, making it a very versatile unit.

The CMP70.1-SP-505-FN-NNNN-NW is a P70 IndraControl module from Bosch Rexroth Indramat. It runs on an AMD Sempron processor with a clocking frequency of 1 GHz. It is a CNC control module and functions as the main unit in an advanced IndraMotion MTX control system. By performance, it has a max. of 64 axes, 12 NC channels, 32 thereof spindles and 0.5 ms Ipo cycle time.

It comes with 3 dual LEDs (green activation LED, red and keypad red LED) and connects to a network using its Ethernet X7E interface. The CMP70.1-SP-505-FN-NNNN-NW connects with SERCOS-interface compatible drives via fibre-optic cables. Also, its communication with operating panels of the VAM type, actuators and sensors is made possible via the PROFIBUS-DP interface. By design, this control module, like other CMP models can accommodate optional function models such as CANopen Double Master and High-speed Input/Output Interface. The high-speed I/O interface on the CMP70.1-SP-505-FN-NNNN-NW comes with 8 high-speed inputs and outputs.

The storage temperature of the CMP70.1-SP-505-FN-NNNN-NW is within the range of -20 degrees C to 70 degrees C. Likewise, its permissible operating temperature range is between 5 degrees C to 55 degrees C. The power consumption of this unit rated at 0.021 kW, and it has a 5 VDC supply voltage at 5 Amperes. It has an integrated SRAM of 16 MB and an SDRAM of 256 MB. If the CMP70.1-SP-505-FN-NNNN-NW is used in combination with standard VSP industrial PCs, the stored data is backed up via a 3V/2.3Ah external battery, with 25 years backup time. When used with compact VPP industrial PCs, the data backup mechanism is aided by a 3V/1Ah battery with 6.3 years of backup time.