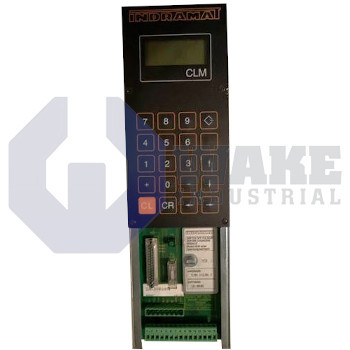 Warranty
1 Year Wake Industrial Warranty Included
Shipping
Worldwide shipping via DHL, UPS, and Fedex
Exchange
Call to find out about our exchange credit for your defective unit.
Sell Us Your Surplus
Have a FWA-CLM1.3-LR1-03VRS-MS to sell?
Click Here

The CLM controls offer sufficient machine control in a wide variety of applications without using an external line control. The external line control is used to control the CLM controls when they are utilized in remote operations. This is possible with the use of computers or controllers which are programmable and capable of controlling operations of the machine as a whole. The line control basically functions as the conveyor of commands and information receiver from the CLM. This is achieved by the use of distinct I/O connectors to the CLM. Other information regarding system status, programs, and parameters can be conveyed in two-way between the CLM and the host devices like computers and programmable controllers through the port of multi-format serial communications.

The FWA-CLM1.3-LR1-03VRS-MS firmware module for CLM axis positioning controls produced by Rexroth Indramat has sixteen auxiliary inputs as wells sixteen auxiliary outputs that are user-defined for electrical control and acknowledgement of machine functions. The expandable option of this CLM control increases the auxiliary inputs and auxiliary outputs to 88 and 51 respectively. The front panel of this CLM control which has a keypad is mounted separately. It can be mounted at most five meters away from the FWA-CLM1.3-LR1-03VRS-MS control. This control also possesses a program assembler known as MotionManager. The main functions of MotionManager include effective creation and editing of executable user programs for this control.