The CLM01.3-X-E-2-B-FW is a controller from the CLM Controller series manufactured by Bosch Rexroth Indramat. This controller contains 3 axes and a control voltage of 24 VDC . It also features 64 inputs and 32 outputs with expansion for greater efficiency and reliability 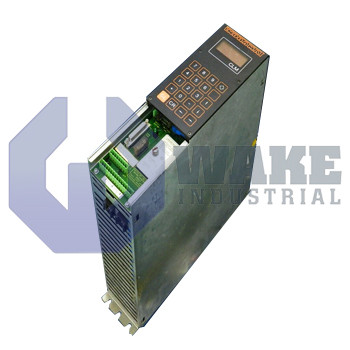 The CLM01.3-X-E-2-B-FW is a controller from the CLM Controller series manufactured by Bosch Rexroth Indramat. This controller contains 3 axes and a control voltage of 24 VDC . It also features 64 inputs and 32 outputs with expansion for greater efficiency and reliability

Warranty
1 Year Wake Industrial Warranty Included
Shipping
Worldwide shipping via DHL, UPS, and Fedex
Repairs
We offer repair service for the CLM01.3-X-E-2-B-FW in 10 days
Sell Us Your Surplus
Have a CLM01.3-X-E-2-B-FW to sell?
Click Here

Bosch Rexroth is one of the top-rated automation equipment manufacturers. The company has a global outreach, and its products are regarded as highly innovative and user friendly. The company manufactures highly efficient servo drives and amplifiers.

The CLM01.3-X-E-2-B-FW is a position control device produced by the company. It has a modular structure and is used in roll feeds, automation bending machines, woodworking machines, and packaging equipment. The device is capable of running several diagnostic tests on its own. It gives real-time reports regarding operating status, operator errors, machine errors, and faults in the module. For specific requirements, users can program the device on their own. The programming process is simple and intuitive. Users are only required to assign values into a set of parameters. This model can control motion across four axes simultaneously with pinpoint accuracy. With a fee resolution of 0.001 inches, the system can control motion with high precision. If users have some programming knowledge, they can use the system’s front control panel to enter a simple program that can control motion.

The CLM01.3-X-E-2-B-FW can be used to communicate system status, parameters, and programs to other controllers and desktop PCs. The device comes with a liquid crystal display and a 20-digit keypad. There are multiple languages to assist the users, including German, French, Spanish, Italian, English, and Spanish. The module uses an AC servo drive for position control. The servo drive works in conjunction with a closed-loop feedback device. A special feature of the CLM01.3-X-E-2-B-FW is that it can predict motion patterns. This allows the system to instantly detect a difference between original and programmed values and generate corrective signals.