The CDB01.1C-SE-ENS-ENS-NNN-NN-S1-S-NN-FW Control Unit is manufactured by Rexroth Indramat Bosch. This unit's Master Communication is SERCOS Interface with two different options of IndraDyn and IndrDyn. The firmware for this control unit Must be ordered Separately.
Request a Quote Request Repair 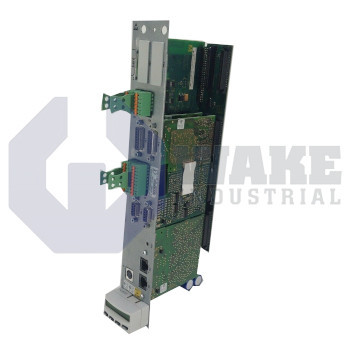 The CDB01.1C-SE-ENS-ENS-NNN-NN-S1-S-NN-FW Control Unit is manufactured by Rexroth Indramat Bosch. This unit's Master Communication is SERCOS Interface with two different options of IndraDyn and IndrDyn. The firmware for this control unit Must be ordered Separately.
Request a Quote Request Repair

Warranty
1 Year Wake Industrial Warranty Included
Shipping
Worldwide shipping via DHL, UPS, and Fedex
Exchange
Call to find out about our exchange credit for your defective unit.
Sell Us Your Surplus
Have a CDB01.1C-SE-ENS-ENS-NNN-NN-S1-S-NN-FW to sell?
Click Here

Bosch Rexroth is considered an industry leader in the area of motion control technology. The company’s products are rated highly by professionals around the world.

The CDB01.1C-SE-ENS-ENS-NNN-NN-S1-S-NN-FW is a control unit belonging to the CDB series. The highly functional control unit is designed for controlling two drive control axes at a time. The drive package comes with fiber optic cables that can be used to connect the system with a Sercos interface. The control unit is frequently used in handling machines, food machines, machine tools, paper printing machines, and packaging machines. The CDB01.1C-SE-ENS-ENS-NNN-NN-S1-S-NN-FW can be operated at multiple switching frequencies including 2 Hz, 4 Hz, and 8 Hz. The device comes with 18 digital outputs and four digital inputs that significantly increase the connectivity options. The device comes with multiple interfacing options, different integrated safety features, and multiple technology functions. A standard control panel is provided with this control unit. For storing the drive parameters, firmware, and its settings, and MMC (multimedia interface) is provided with the system.

The CDB01.1C-SE-ENS-ENS-NNN-NN-S1-S-NN-FW can be used with different encoder options. Indradyn, 1 Vpp, and TLL encoders can be used with the system depending upon the functions required. For further enhancing the control unit’s performance, DeviceNet, CANopen, and Sercos S3 interface can be used with the control unit. The system is capable of encoder emulation. A HAS05.1-007 signal level converter has been provided for this purpose. Owing to very short cycle times of current, velocity, and position control, the control unit does an exceptional job at controlling the system’s current, control, and velocity. The CDB01.1C-SE-ENS-ENS-NNN-NN-S1-S-NN-FW is equipped with two separate slots for safety technology. A serial RS232 interface also comes with this control unit. It can be converted to the RS485 standard by the use of a signal level converter. This product is available from Wake Industrial with a one-year warranty period.