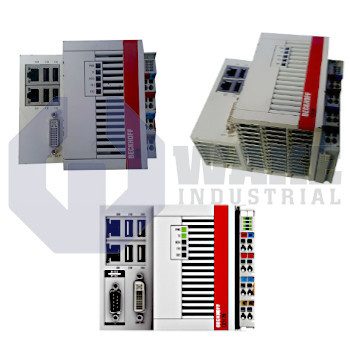 Warranty
1 Year Wake Industrial Warranty Included
Shipping
Worldwide shipping via DHL, UPS, and Fedex
Exchange
Call to find out about our exchange credit for your defective unit.
Sell Us Your Surplus
Have a CX5120-0113 to sell?
Click Here

The CX5120-0113 is an embedded PC, an advanced product of Beckhoff. It has Windows Embedded Compact 7 operating system which is very fast and reliable. It is compatible with The Windows Control and Automation Technology 2 (TwinCAT2) NC I runtime control software.

It has a Video Graphics Array adaptor that connects VGA monitors to CX systems. It has K- bus and automatic recognition in the input and output connection. The CX5120-0113 has a single core processor in its operating system. The processor is a product from Intel atom. It operates under a relative humidity of 95% with no condensation and at temperatures within the range of -25oc to 60oc. 40oc. Permissible ambient temperature for storage is within the range of -40 oc to 85 oc. It has integrated 1 second UPS for persistent memory (1MB on CFast card). It has diagnostic LEDs which display on the power button, flash access, TC status, and bus status.

The CX5120-0113 is one of the strongest models in the CX5120 series. It has the ability to withstand impacts from solid due to its IP20 protection class. Note that security precautions must be taken in accordance with IEC 62443 so as to restrict some access to networks. The CX5120-0113 is designed with two advanced Ethernet interfaces that work separately. It has Digital Video Interface that is compatible with both digital and analog devices like printer, scanner, digital cameras etc. It is a lightweight industrial device that can easily be installed and maintained. Another notable feature of the CX5120-0113 is its quality Digital Video Interface which displays superior resolution and HD videos. It has good resistance power to both vibrations and shocks. The rating of its 4 USB ports is 2.0.